5-Hydroxytryptophan, or 5-HTP for short, is a natural, over-the-counter supplement aimed at the treatment of depression, sleep disorders and even overeating. In several double-blind-placebo studies – where one group is given 5-HTP, the other given a placebo – evidence has emerged that the supplement is, in fact, effective in treating depression. It can be found in nearly any drug store or natural supplement isle.

The Benefits of Using 5-HTP

Unlike many prescription anti-depressants on the market, this over-the-counter supplement does not fall in the SSRI or MAOI class of drugs, therefore not causing many of the side effects associated with the use of traditional anti-depressants. Also, it’s non-prescription availability and generally low price keeps 5-HTP easily available.

Depression aside, 5-HTP’s ability as a sleeping aid has also been proven to be effective. And, once again, unlike many prescription pills aimed at treating the same symptoms, 5-HTP is known to have less side effects and a lower price tag than many sleeping pills on the market. However, while the 5-HTP side effects aren’t many, special considerations should be made before using a 5-HTP-containing product.

While not common, mild to moderate gastrointestinal problems such as diarrhea have been reported after use of 5-HTP. Also, while not a culprit when used alone, 5-HTP may cause serotonin syndrome when mixed with certain anti-depressants, St.John’s wort or other drugs which may have an effect on serotonin levels. Also, being relatively new to the market, not enough studies have been done to find that 5-HTP has no interactions with other medications. However, at this point none have been reported. Nonetheless, it is advised to speak with a professional before mixing 5-HTP with other medications. 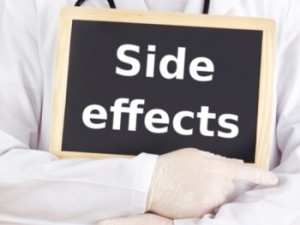 All in all, the majority of 5-HTP side effects can be prevented by simply talking with your doctor before mixing it with other medications, which is advised when introducing anything new to the body anyway. 5-HTP can be a great solution for mood and sleep disorder sufferers who find the side effects of traditional medications too uncomfortable or would rather try a natural solution.